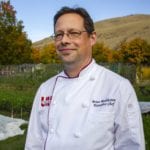 Brian Heddlesten took his first steps into the culinary world with the Sunset Bread Cookbook at the age of 13. After experimenting with every recipe from the family cookbooks he found that he had a love for cooking and particularly world cuisine. He stepped into his first culinary job with the Aramark Corporation and over the following years worked with industry giants such as Sodexho and Providence Health Services. While working for Providence he was inspired by his Executive Chef to provide quality dining in the healthcare industry, which was just gaining momentum. Over the next ten years, Brian worked as the Executive Chef for companies such as The Springs Living, The Goodman Group, and Avamere developing menus that provided high quality restaurant style dining with an emphasis on new taste experiences and education on world-wide cuisine.

Brian Heddlesten joined the University of Montana in September 2017 after deciding to relocate from the Pacific Northwest. He loves the outdoor options, relaxed environment, and the dedication of the dining staff as they create some of the best food available in Missoula. During his spare time, he and his fiancée, help their four year old son develop a love for cooking and new experiences. They currently make a lot of fried rice and guacamole.

Whole Trout with Cilantro ChimichurriTrout is easy to come by in Montana, either at the store or out fishing. The trout for this recipe comes from Flathead Lake, an hour north of Missoula.
Garlic FlatbreadWhile prepping the salad I will throw the flatbread on the grill. It is great with the chimichurri as well.
Artichoke and Raw Vegetable Farro SaladPairing the trout with a salad using local farro and spring vegetables, makes a quick meal.